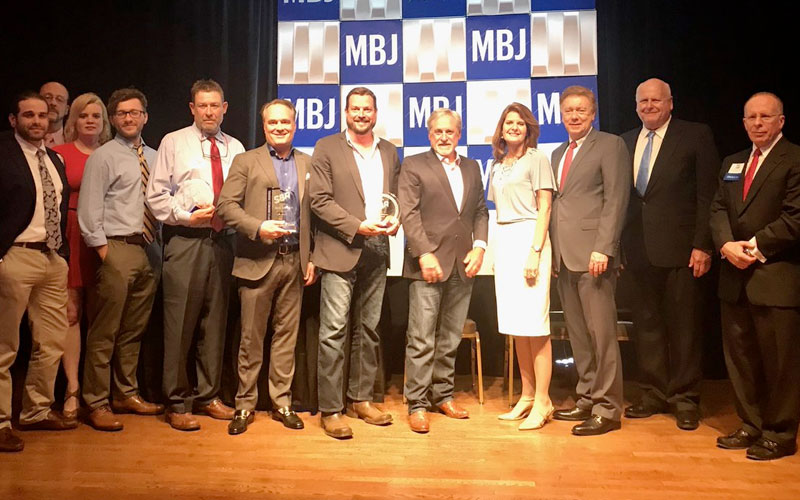 Upon accepting the award for the Small Business Award-Large category, a longtime Memphis executive recalled a thought he recently had about the Memphis business community.

“It struck me a couple of days ago, I hear a lot of bad things about places like Memphis. But, you know what? We’ve got a great business community,” said Ron Coleman, co-founder, CEO and president of Competition Cams, a designer and manufacturer of aftermarket auto parts. “Memphis is a great place to do business. If entrepreneurs like the ones who are here keep things up, we are going to have one of the best communities in the United States.”

The Memphis Business Journal’s 2018 Small Business Awards were held Tuesday, May 15, at the Holiday Inn University of Memphis.

Vaco Memphis helps professionals looking for their next role and clients who are looking to make a hire in technology, accounting, logistics, marketing and risk solutions.

Johnston said he was inspired to be in a room full of companies that were born in Memphis.

“When you think about job creation, small business is the engine that grows this company and where job creation actually happens,” Johnston said when he accepted the award. “As all of you who have left a perfectly good job to start a small business, you know about the sleepless nights and challenges. None of it comes easy, so I want to thank the team at Vaco Memphis that has helped us achieve double-digit growth.”

The company constructs supply chain buildings up to 1 million square feet, including the 615,000-square-foot receive center for Amazon, which broke ground in late 2017.

The $35.9 million facility in Whitehaven is one of the most expensive and time-sensitive projects the company has ever done, said co-founder Chris Lee.

TriCore has been a fast starter: In the two and a half years since its inception, the company grew from doing $30 million in sales in year one to $60 million in year two.

“We take raw materials and create with our hands the final product,” said owner Brad Kellum, who started the company a few years ago in his garage and in September will open store No. 13 in Germantown.

“Every grocery store, every gas station is going to have a bar of soap. Where we are innovative and have corned the market is experience,” said Nick Kunkel, the “Lord of Lye” at Buff City Soap.

The Small Business Awards-Large category honored companies with 51 or more employees. Taking the top MBJ prize, Competition Cams president and co-founder Paul “Scooter” Brothers said one of their best accomplishment in the past year was having won the best new product of the year at their industry’s annual trade convention.

“You can’t rest on your laurels in our business,” Coleman said. “If we don’t produce new products and innovations, we fall behind.”

The MBJ’s Small Business Awards started in 1980 with a ceremony at a small restaurant with fewer than 100 people in attendance. Over 38 years, it has grown to be an annual hallmark event in the business community, said MBJ publisher and market president Joanna Crangle.

“Entrepreneurs are the backbone of our economy,” Crangle said.

Regions Bank, which has sponsored the Small Business Awards since its inception 38 years ago, and accounting firm Alexander Thompson Arnold were Gold Sponsors for this year’s awards. Behind the Scenes was Supporting Sponsor.

Prodigi Arts filmed all the videos highlighting honorees. Finalists were selected by an expert panel of judges.